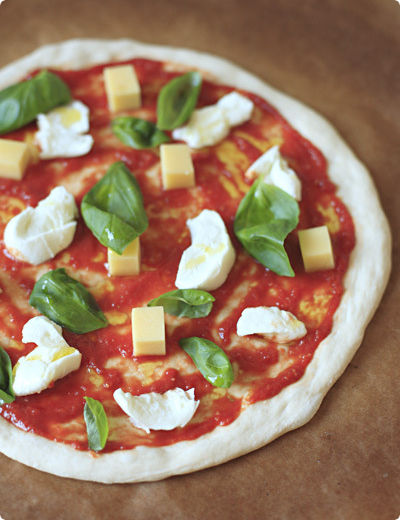 A few weeks ago I was sitting in what I sometimes describe (depending on my mood) as my favorite restaurant in the world: Ken’s Artisan Pizza in Portland, Oregon. It’s a tradition my dad, stepmom and I have every time I spend a few days in town; we go to Ken’s on my first night, or my last night, or sometimes both. Sometimes I secretly wish we could eat there all the nights in between too. I love the place that much.

If you’ve ever been to Ken’s you surely know why. It’s comfortable and friendly, and everything they make—the vast majority of which comes out of their hulking wood-fired oven, whose warm glow infuses the entire dining room—is spectacular. But this visit to Ken’s was a little different for me. Not because anything was less delicious than usual, but because I found myself doing more than just savoring the interplay between the pizza’s puffy, tender crust and intensely-flavored toppings. This time I was analyzing it, admiring the open-holed structure and polka-dot-like bits of char, wondering what kind of flour Ken uses in his dough, and whether he opts for commercial yeast or a sourdough culture. What hydration level has he settled on, I mused, and what percentage salt? How long does he ferment?

It seems my latest project has had more of an impact on me than I thought.

That project, as you’ve already deduced, was pizza. Neapolitan-style pizza, or what in the U.S. is often called neo-Neapolitan, to be exact—thin-crusted pizzas with puffy, chewy rims and a restrained scattering of high-quality toppings.

It started about a year ago. I can’t remember if there was something that triggered it, I mean other than my general frustration that the best pizza here in our corner of provincial Germany is what you pull out of the supermarket’s freezer cabinet. It boggles my mind; we’re not even that far from Italy, but in pizza terms we might as well be in Japan. Wait, scratch that—these days even Japan is a better place to be.

But as I’m one who likes to see an opportunity in any problem (well, at least when it comes to food), before I knew it I had embarked on a personal mission to develop a recipe for the most excellent homemade pizza this side of the Alps. I knew I couldn’t do real Neapolitan pizza, since that requires a wood-fired oven capable of temperatures in excess of 900F/480C (maybe someday, when we have a backyard…), but I intended to get as close as I possibly could.

I won’t bore you with a chronological account of all my pizza successes and failures over the last year, but suffice it to say I know more about the subject than I ever thought I would. I’ve tried just about every different kind of flour, leavener, hydration level, fermentation time, kneading technique and percentage of things like salt and oil imaginable. I mined sites like pizzamaking.com and the Fresh Loaf for the latest tips and tricks, and tried methods touted by everyone from Jeffrey Steingarten to Heston Blumenthal. I learned how to calculate baker’s percentages with my eyes closed. In a fit of insanity I even cultivated a sourdough starter, something I swore I would never do again after my last one died such an agonizing, drawn-out death at the back of my fridge. Frustrated with my oven’s wimpy output, I bought a new one—as well as one of these, which turned out to be fabulous for baking naan and pita, but not so fabulous for pizza, particularly once I discovered how to squeeze a little more heat out of my regular oven. 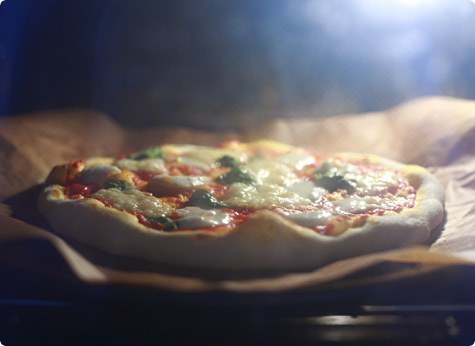 And would you believe it? After all that, I’m still not sick of pizza. Far more amazing, though, is I think I’ve cracked it. I mean, it’s still not the genuine article and it certainly wouldn’t win any contest against a competent pizzaiolo with a pile of burning logs, but for a home-baked pizza it is pretty darn good. Actually, scratch the ‘home-baked’ bit—it’s pretty darn good period. And reliably so; in fact, when I realized that I can’t actually remember my last pizza flop, I decided the time has come to share my project with you.

I know there’s more opinions on pizza out there than fish in the sea (particularly these days), and plenty of people have been at it a lot longer than me. But what I’ve come to realize is that pizza is also a dish that’s as much about feeling as it is about formulas, and success is more about figuring out what works best for your unique set of variables (your flour, your oven…) than slavishly following a recipe. That said, of course I’ll give you one. Actually, two. But what I also hope is that even those of you who are seasoned pizza-makers might pick up a new idea or two. And I’d love for you to share your tips and tricks with me in the comments.

But first, here’s a summary of the most important things I’ve learned. 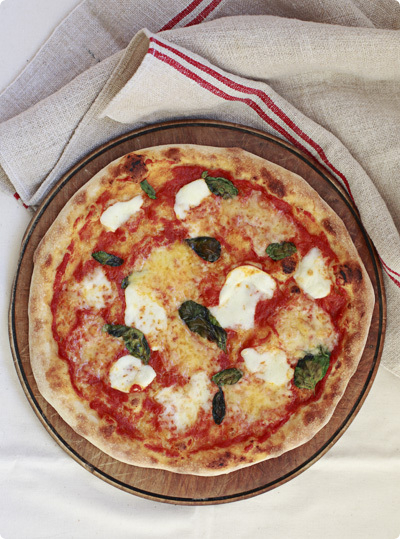 I know, this isn’t a purists’ margherita, but I’ve never claimed to be a purist of any kind. Despite my embellishments, though, it still retains its trademark simplicity and exquisite harmony of sweet tomato, spicy basil and buttery cheese, just with a little more depth. On the subject of cheese, do splurge on something good—you use so little of it that every bite needs to count (and at these amounts nothing is that expensive anyway).

You’ll notice there are two crust options here. The sourdough crust is the one I make almost exclusively by now, so if you happen to have a 100% hydration starter on hand, you’re good to go. For everyone else I’ve included my regular-yeast version—just note the considerably longer fermentation time, and plan your pizza activities well in advance. I know, it’s tough. But so worth it.

Oh, and yes, nearly all the measurements here are in metric weight. I wasn’t kidding about buying a scale!

7oz (200g) cheeses of your choice, preferably a mixture of buffalo mozzarella and something sharper and/or pungent such as provolone piccante, taleggio or a young pecorino

For the commercially-yeasted crust, pulse flour (with gluten, if using), yeast and sugar in the food processor. With the machine running, add the water and process just until a cohesive dough forms. Let sit, covered, for 20 minutes. Pour in the salt and oil, switch on the machine, and process until the dough is smooth and forms a ball around the blade, about 30 seconds. Let sit, covered, one hour*. Remove the dough from the processor, knead lightly on an oiled surface a few times, place into a large oiled bowl or container, cover tightly and refrigerate. Store in the back of the fridge for 3-5 days (the longer the better) before using. *If using European flour with gluten added, process briefly (~5 seconds) every 15 minutes during this hour, for a total of four times.

For the sourdough crust, pulse flour (with gluten, if using) and sugar in the food processor. In a separate bowl, stir together the starter and water until the starter has dissolved. With the machine running, pour in the liquid and process just until a cohesive dough forms. Let sit, covered, for 20 minutes. Pour in the salt and oil, switch on the machine, and process until the dough is smooth and forms a ball around the blade, about 30 seconds. Let sit, covered, two hours*. Remove from the processor, knead lightly on an oiled surface a few times, place into a large oiled bowl or container, cover tightly and refrigerate. Refrigerate overnight, or for up to two days. *If using European flour with gluten added, process briefly (~5 seconds) every 30 minutes during these two hours, for a total of four times.

Prepare the toppings. For the sauce, drain your tomatoes in a sieve. Remove any stray bits of skin, then, one at a time, gently squeeze the tomatoes to help them release as much liquid as possible. If this causes them to burst and expel watery seeds, so much the better. Process the drained tomatoes along with the rest of the sauce ingredients in a food processor until smooth. Alternatively a deep bowl and an immersion blender work great too. If using fresh mozzarella, tear it into rough chunks and set these on a double thickness of paper towels to drain. Cut firmer cheeses into 1/2-inch (1cm) cubes. Remove basil leaves from their stems.

Shaping, topping and baking. About two hours before you want to bake the pizzas, remove the dough from the fridge. Divide the dough in half and shape each half into a ball, pulling the surface skin taut and pinching it together underneath. Set the balls a few inches apart on a lightly floured surface, dust with flour, and cover with a clean kitchen towel. Let rest for 60-90 minutes.

Meanwhile, about an hour before you think you’ll be ready to bake, place your stone or plate in the upper part of your oven (about four to five inches/10-12cm from the top element) and preheat to its maximum setting.

Prepare two squares of parchment paper. Dust one of the dough balls with flour and lay it in the center of a parchment square. Using the flat underside of your fingers, gently press the dough into an 8-inch (20cm) disk, leaving the outer edge slightly thicker than the center. Now taking care not to tear the dough, gently stretch the dough into an approximately 12-inch (31cm) round, working along the edges and giving the dough quarter turns as you stretch. Another good technique is to pick up the pizza by its edges and keep turning it, letting gravity pull the dough down. If it tears anywhere, just pinch it back together, and if it sticks to anything, dust it with a little more flour. When you have a more or less round crust lying on your parchment, trim the paper around it so that it’s only a little larger than the pizza. Prick any large bubbles you see around the dough’s outer edge—these will just burn in the oven. Lay a towel over the crust and repeat with the other dough ball.

Using the back of a spoon, spread half the tomato sauce (about 1/2 cup (125ml)) in a thin layer over the surface of one crust, leaving 1/2-inch (1cm) border around the edge. Scatter half the cubed cheese over the sauce, and lay a few whole basil leaves among the cubes. Drizzle 1 tablespoon of olive oil in a spiral pattern over the top.

Switch your oven to broil. Using a pizza peel, cutting board or the back of a baking sheet, transfer the topped pizza (still on its parchment) to the oven and slide it onto your stone. Close the door and let it bake for four to five minutes, or until the crust has puffed and set. Working quickly, open the door and insert a spatula between the pizza and parchment paper. Pull out the paper (it’s not that hot, so you can use your bare hand) and close the door again to let the pizza finish baking, about another three to five minutes (if you forget to remove the paper it’s not a big tragedy, the bottom just doesn’t brown quite as deeply). When the topping is bubbling and the crust is golden, remove the pizza from the oven using a peel or a couple of spatulas. Transfer to a wire rack to cool for a couple of minutes before slicing and serving. Top and bake the second pizza in the same way.

17 thoughts on “The Pizza Project”